There are a lot of swing dances that developed, evolved, intertwined and drifted apart again. Below you can see a little tree to simplify what happened. In the descriptions below, we present you the dances we currently offer in our scene. 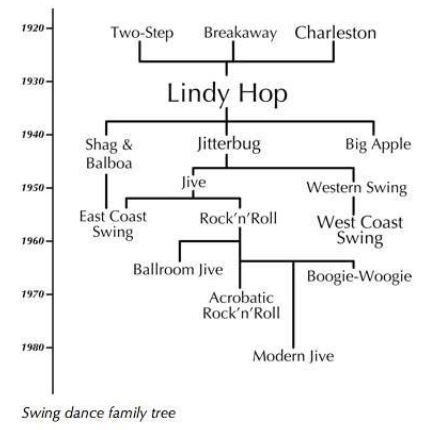 Lindy Hop is a couple dance with its origin in the 30’s and 40’s Harlem, New York. It was born on the streets of Harlem and its life is very intertwined with the one of the Savoy Ballroom. The name “Lindy Hop” was inspired by Charles Lindbergh’s trans-Atlantic solo airplane hop in 1927.

Lindy Hop developed from and along with the Swing music (one genre within jazz). Count Basie, Duke Ellington, Jimmie Lunceford and Chick Webb are good examples of Big Bands from the 30’s and 40’s that played truly swinging jazz.

In the 1980’s this dance was given new life as young dancers from Sweden connected with and learned from the original dancers.

Lindy Hop is often referred to as a fast dance with a lot of kicks and acrobatics. Surely this is one side of the dance and this is often what we see in movies, clips and shows. But it is foremost an improvised couple dance, danced to all kinds of tempos, including really slow. Lindy Hop is a simple dance in its basic structure but can also get very advanced when learning the rhythmical language of jazz and improvisation. Its core is improvisation – you play, you improvise, you syncopate. It is mostly characterized by a breakaway move, known as the “Swing-Out”, where the lead sends the follow out of closed position and allows both of them to improvise solo steps. Unlike most ballroom dances, where the dancers float or glide on the floor, Lindy Hop is danced “into the floor” – it uses a “pulse” that drives and connects the dancers. Both lead and follow constantly communicate with each other through connection, movement, timing, harmony and musicality.

This dance is mainly practiced in couple but includes individual steps too. The Lindy Hop is suitable for everyone, since everyone can adapt it to their own personality. The only indispensable thing is the music which gives it the soul needed to captivate anyone.

Listen to Frankie Manning, one of the most influential dancers and the man that has had a crucial impact on Lindy Hop, both when creating the dance and when spreading it again in the 1980’s. He is referred to as “the best dancer of the time” and was a leader and choreographer for Whitey’s Lindy Hoppers. Without Frankie, his personality, his humbleness and charm and his true passion of sharing this dance it would most likely never have grown as big as it is today. Frankie was a huge part of spreading the dance world wide after its revival in the 1980’s.

a bit of current day lindyhop!

This dance is called Authentic Jazz because it grew concurrently with early jazz music. Used loosely the term describes all styles that were invented to accompany jazz music, including partnered styles, but nowadays it is used to describe the purely solo dance styles that grew in the 1920s and 30s.

A number of classic routines have survived the decades more or less intact, but authentic jazz is simply a repertoire of steps, derived mainly from tap, African dance, Charleston, and earlier partnered swing styles such as Breakaway. New steps have been invented since that time, retaining the vintage styling to differentiate them from modern jazz dance. However, what makes Authentic Jazz really authentic, is the personal interpretation of the dancer: personal interpretation and variations of the steps and of the body movements, together with the individual expression of the music, are the elements that make this dance so amazing.

Authentic jazz is a lot of fun, and very expressive – you can let loose without worrying about a partner! It is also great for your partnered dancing as it improves rhythm, musicality, styling and understanding of jazz structure. Even this dance was born almost by chance and not in a rules-based environment.

Some famous choreographies include the Shim Sham, the Tranky Doo and the Big Apple.

Blues dancing evolved from Blues music (which preceded swing music). Like Lindy Hop, it finds its roots in the African American culture of the early twentieth century. Originally it was not danced in public spaces, but rather in jukejoints or at private house parties. It only recently has become a popular dance, practised in blues dance scenes around the globe. Blues dancing thrives on expressing feelings through dancing, moving to the music and improvising. It can help a dancer to appreciate dancing to slow music, with simple movements, how to stay connected to the partner and to the ground, how to lead and follow efficiently using the whole body rather than just the arms.

This dance is even more connected to the music, to an extent where the dancer becomes one with the music. This dance can also be danced solo.

Balboa is a swing dance started in California in the 1920s.

The term Balboa originally referred to a dance characterized by its close embrace and full body connection. It emphasizes rhythmic weight shifts and lead-follow partnership. Different dancers in the same region at the same time also danced “swing,” a dance characterized by twists, turns, and open-position movement. Over time, these two dances merged and became collectively known as Balboa. The original Balboa dance is now referred to as Pure Balboa, and the original “Swing” dance is now referred to as Bal-Swing or L.A. Swing to differentiate it from other types of swing. Because of its emphasis on subtlety and partnering rather than flashy tricks, Balboa (Pure Balboa in particular) is considered more of a “dancer’s dance” than a “spectator’s dance.”

Tap dancing is a dance where a performer creates a staccato beat by tapping with his shoes while dancing. This dance was incorporated into many dance routines in Hollywood movies from the Swing era, including classics such as Singing in the Rain. There are two major types of tap dancing: rhythm (jazz) tap and Broadway tap dancing. The latter focuses on the dancing, the former more on the musicality. Tap dancing influenced a lot of Lindy Hop moves (for example, there is a tap version of the famous Lindy Hop routine, the Shim Sham). The focus on rhythm of Tap dancing and the strong interdependencies between Lindy Hop and Tap dance make Tap dancing a valuable addition to any Swing dancer’s repertoire.